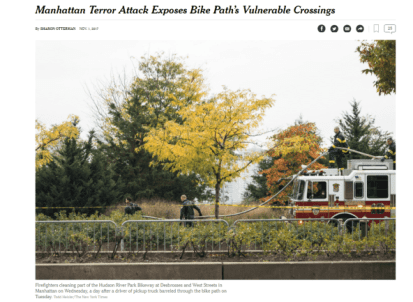 More than 10 years ago, Eric Ng was struck and killed by a drunken motorist who drove for more than a mile on the bike path of the Hudson River Greenway. He was killed at about the same location where the driver in a terror attack entered the bike path on Tuesday.

Despite calls to improve safety on the path since that time, recommended steps were not taken. In particular, bollards — metal poles that would block vehicles from accessing the path — were not installed at most of the access points where cars can turn onto the path.

“We have left it up to chance despite the fact that someone has been killed there before,” said Caroline Samponaro, the deputy director of Transportation Alternatives, an advocacy group that has pushed for greater safety on the path for over a decade. “While terrorism is not preventable, the ability for a driver to drive there was.”

The four-mile-long Hudson River Park Bikeway, which hugs the West Side Highway on the western side of Manhattan, is the busiest bike path in the city, with some 6,000 cyclists using it each day. The downtown section, where Tuesday’s attack took place, was completed by the early 2000s, before the Sept. 11, 2001, attacks. Since its opening, it has been a magnet for tourists and locals alike.

Through the year, clusters of tourists pedal leisurely down the path taking in the view of the Hudson River and the Jersey City skyline. Serious cyclists speed by. Parents amble by with strollers. Children whiz by on scooters as they move between the playgrounds of Hudson River ParkMost of the path is edged by concrete and other barriers that prevent drivers from the West Side Highway from veering on to it. But those same barriers would also make it difficult for bikers and pedestrians to escape if a vehicle were barreling toward them on what is essentially a closed corridor at many points.

At the multiple vehicle access points, the path becomes exposed and vulnerable. Those tend to be at intersections where there are parking lots, offices and sports facilities on the western side of the bikeway that need to be accessed by cars. One of the busiest access points is at Pier 40 at West Houston Street, which is where, according to the police, Sayfullo Saipov, 29, piloted his rental truck onto the bikeway on Tuesday. There are no bollards to prevent access by a car at that location.

On Wednesday, the bike path was closed from Pier 40 south, but a cluster of cyclists and runners gathered at the police barriers to pay their respects. A few feet away, a bike painted white was chained to a lamppost in memory of Mr. Ng.

Edward Canfield, 37, a contractor from Brooklyn, was looking at the crime scene. Because he bikes with headphones on, “I would’ve had no chance; he would’ve clobbered me,” he said.

Mr. Canfield said he had come on Wednesday in part because he could not picture how the truck was able to drive on the path, though he had seen police vehicles on it in the past.

“Isn’t there barriers for that periodically?” he said. “That’s one of the reasons I came here — I wanted to look at it and see the vulnerability that this guy found.”

Sam Blount, 67, who lives in Midtown Manhattan, said that while he jogged frequently on the path, he never thought about safety. He wondered if the bikers and pedestrians would want the path impeded by bollards or other safety barriers.

Pier 40 houses a commercial parking garage, athletic fields, a community boat house and the administrative offices of the Hudson River Park Trust, the city-state partnership that manages the park.

Mr. Ng, 22, was killed in front of it in 2006 after a drunken driver leaving a party at Chelsea Piers mistakenly turned onto the bikeway at West 17th Street and drove south. The police said he was driving at 50 miles an hour when he hit Mr. Ng, just north of where Mr. Saipov entered the path.

Another bike-path fatality in 2006, of Dr. Carl H. Nacht, a 56-year-old physician, near West 38th Street, helped fuel a call by transportation advocates to make the path, which was already among the safest places in the city for bikers, even more secure.

Transportation Alternatives called for several reforms, including closing as many vehicle access points as possible and installing retractable bollards at crossings that have to remain open. The bollards could sink into the ground if emergency or park vehicles needed access.

The bike path is on state-owned land, so the state ultimately decides where a bollard would be placed. Joseph Morrissey, a spokesman for the state Department of Transportation, said that the agency “will be undertaking a top-to-bottom review of these recreational spaces and evaluate any new measures to further enhance security.”

Polly Trottenberg, the city’s transportation commissioner, said that the state had installed bollards near Chelsea Piers after Mr. Ng’s death. But at the West 17th Street site, it appeared that a vehicle could pass by the single steel bollard there. Bollards were not placed farther south along the path of Tuesday’s attack.

Since the attack, city and state officials have discussed taking immediate steps to tighten security on that stretch of the path, including adding more bollards, blocks and jersey barriers, she said. She said her department also planned to work with state transportation officials on additional long-term safety measures.

“A number of city agencies — including the Transportation Department and the N.Y.P.D. counter terrorism bureau — have ongoing discussions and work together on ways to make various sites and the city safer,” she said.

Ms. Samponaro said there were also bollards on the path at Barclay Street, a few blocks south of Chambers Street, where Mr. Saipov’s truck struck a bus and came to a stop.

Where Mr. Saipov exited the bike path at Chambers Street is another notoriously risky intersection. In June 2016, a cyclist, Olga Cook, was killed there when an allegedly intoxicated driver made a right turn from the West Side Highway, crossing the greenway. At least 17 other cyclists or pedestrians had been injured there in the preceding five years.

Daniel Flanzig, a personal injury lawyer who has handled multiple cases on behalf of bicyclists killed or injured on the bike path, including Ms. Cook’s case, said there was a clear need to make the path safer.

“Everyone’s first reaction yesterday was to have bollards put onto the bike path,” he said. “It makes sense.”