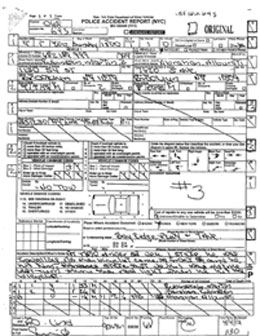 When the police are called to the scene of a crash, they are required to prepare a Police collision Report (P.A.R.), also known in New York as an MV-104. The report is to be prepared as accurately as possible and describe the details surrounding the crash. Our experience has taught us that accurate and complete is not always the case.

Police collision Reports contain a vast amount of information regarding a crash and those involved. This includes the crash itself, the condition of the vehicles or bike, the weather, injuries, and other information surrounding the incident. More importantly, they help you identify the driver of the vehicle, its owner, and his or her insurance company.

If you have been involved in a crash, you may find it difficult to understand the report. The report contains numbered boxes to the left and to the right of the body of the report, as well as the actual body of the collision report itself. The body of the accident report contains information on the drivers and registered owners, normally a sketch of how the crash occurred, and the responding officer's description of the incident. It also may contain statements made by the parties involved. The report is then signed and dated by the officer who prepared it. If the crash is severe enough, the report will indicate whether the A.I.S. responded and investigated the crash, and whether photos were taken. It will also indicate if a summons was issued or arrest made.

In order to understand the codes utilized in preparing the report, you need a Police Report Overlay. A link to the overlay is here:

Additional links to help you identify Precincts are here:

f you have been involved in a bike or cycle crash and have additional questions about your rights to compensation as a result of your crash, contact us at (866) 352-6944.