Doored' While Cycling in N.Y.

"Doored" While Cycling in New York

Who is responsible when you are doored by a vehicle in NY? 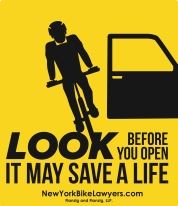 The "door zone" is the space of 2-4 feet adjacent to parallel parked, double parked, or stopped cars. While cycling in the "door zone," a cyclist can suffer a severe injury or even death if a door is suddenly opened into their path of travel. "Doorings" are all too common in New York and make up a large percentage of our cycling crash practice.

When choosing a lawyer to handle a "dooring" crash case, your lawyer should not only be a cyclist, but should also be familiar with the laws and strategies used in litigating this type of crash. Not all personal injury lawyers have this knowledge and experience. Daniel Flanzig has written the only published New York Law Journal article on litigating a "dooring" claim in New York and is regularly quoted in New York and National news outlets regarding these claims.

Our firm has successfully obtained multiple decisions from Justices of the Supreme Court of the State of New York where we have obtained Summary Judgement​​​ for cyclist's in a "dooring" crash case. This means we have had the Court find as a matter of law that the vehicle was 100% responsible for the crash. We have gained a national reputation of being one of the top "dooring" crash attorneys in the Country.

The Law in New York

In New York City and New York State, opening a vehicle door into moving traffic is a violation of the Vehicle and Traffic Law:

Section 1214 of the Vehicle and Traffic law states "opening and closing vehicle doors – "No person shall open the door of a motor vehicle on the side available to moving traffic, and until it is reasonably safe to do so and can be done without interfering with the movement of other traffic, nor shall a person leave a door open on the side of a vehicle available to moving traffic for a period of time longer than necessary to load or unload passengers."

NYCRR- Section 4-12-(c) Getting Out of Vehicle: In New York City: "No person shall get out of any vehicle from the side facing on the traveled part of the street in such manner as to interfere with the right of the operator of an approaching vehicle or a bicycle."

NYCRR- Section 4-11, Section C, requires "Taxis….while engaged in picking up or discharging passengers must be within 12 inches of the curb or parallel thereto ".

NYCRR- Section 4-11-Taxi and Cars for Hire - (c) picking up or discharging passengers shall not be made under such conditions as to obstruct the movement of traffic and in no instance so as to leave fewer than 10 feet available for the free movement of vehicular traffic; Where stopping is prohibited; or Within a bicycle lane.

Over 2 Million Dollars Recovered for "Doored" Cyclist to Date

Some Recent Results for Our Clients "Doored" in NY

DISCLAIMER: Previous results are not a guarantee of future success. Each case is unique, and the final outcome of negotiations and/or a trial is never guaranteed.

Cathy Flanzig obtained a $250,000 settlement for a cyclist doored in Brooklyn who sustained a severe wrist injury. After first having the court determined, via summary judgment, that the defendant was 100% responsible for the crash and that our client sustained a serious injury, the defendant tendered the full primary insurance of the vehicle that opened the door. This is one of the many cases where we have successfully obtained summary judgment against the vehicle operator for opening his door into traffic.

Daniel Flanzig obtained a $210,000.00 recovery for cyclist "doored" in Manhattan. The cyclist, a model and bartender, was "doored" on his way to work by an exiting driver on 13th Street. As a result of the crash, our client sustained a severe laceration to his bicep, requiring surgery to repair. The settlement was reached before trial in the Supreme Court, New York County.

Cathy Flanzig obtained a $210,000 settlement for cyclist who sustained severe injuries when "doored" in Brooklyn. The recovery was obtained during a lengthy mediation between our office and the insurance company for the vehicle.

Daniel Flanzig obtained a $150,000.00 dollar settlement for a Long Island cyclist "doored" on a residential street. The settlement was obtained at the early stages of litigation and prior to depositions being held.

Daniel Flanzig obtianed a $150,000.00 settlement for a citibike rider "doored" in Noho. The settlement was paid by both the carrier for the livery vehicle AND a policy of insurance held by the employer of the exiting passenger. The passenger was in the course of their employment at the time they were exiting the vehicle allowing us to tap into the policy of insurance held by her employer due to her violation of VTL 1214.

Daniel Flanzig obtained a $145,000.00 recovery for cyclist "doored" on 19th Street in Manhattan. Our client was traveling West on 19th Street between 5th and 6th Avenues. As vehicular traffic was stopped, our client attempted to pass traffic on the right. As he was traveling along side the defendant's vehicle, a door swung open into his path. Our client attempted to avoid the opening car door, swerved, and crashed. No contact was ever made between the cyclists and the door. As a result of the fall our client sustained a severely fractured wrist.. After obtaining the full policy limit from the owners vehicle ($100,000.00), we were then able to obtain another $45,000 from the exiting passengers own auto policy. This case is an important illustration of two points. The first, contact between a bike and a vehicle is always not necessary in order to establish negligence on behalf of a driver or exiting passenger. Secondly, all possible insurance coverage should be explored before entering into a settlement.

Cathy Flanzig obtained a $140,000.00 settlement for a cyclist "doored" in the West Village. The cyclist was lawfully within a bike lane when an exiting passenger of an NYC Taxi Cab opened the door into his path. As a result of the crash, our client sustained a fractured clavicle. In this case, the cab company and the passenger's insurance company both contributed to the settlement.

Daniel Flanzig obtained a $100,000.00 settlement for a cyclist "doored" in Brooklyn. As a result of the crash, our client sustained a severe shoulder injury. The settlement was obtained during discovery in the Supreme Court, Kings County.

Cathy Flanzig obtained a $100,000.00 total gross settlement for a cyclist "doored" in Manhattan. The settlement was obtained achieving a full settlement with the offending vehicle in the amount of $25,000.00. We then were able to obtain an additional $75,000.00 from our clients own insurance company under the Underinsured Motorist Coverage of his own policy.

Daniel FLanzig obtained a $100,000.00 settlement for a Manhattan Cyclist "doored" while riding in Upstate NY. A a result of the crash our client sustained a fractured finger requiring surgery. The Settlement was obtained after depositions were taken but prior to trial in the Supreme Court, New York County.

Cathy Flanzig obtained $100,000 ( full policy limits) settlement for a Brooklyn cyclist doored by the New York City taxicab. The settlement was reached prior to trial in Kings County, New York

$90,000.00 for Manhattan Cyclist "Doored" by Delivery Van in Manhattan

Cathy Flanzig obtained a $90,000.00 recovery for a New Jersey man "doored" by a delivery van in mid-town Manhattan who sustained a fractured finger in the crash. After compelling the defendants to agree that the crash was the fault of the employee driver, a settlement was obtained prior to jury selection in the Supreme Court, New York County.

Daniel Flanzig obtained a settlement for NYC cyclist who sustained a severe back injury while "doored" by a tourist exiting a NYC Taxi cab while the cyclist was lawfully traveling in the bike lane on 6th Avenue in New York City. A settlement was obtained for almost the full policy limits of $97,500.00 in the Supreme Court, New York (Manhattan) County.

Cathy Flanzig obtained a $80,000.00 recovery for a cyclist "doored" by a double parked car in the Bronx. The cyclist sustained a severe shoulder injury requiring surgery. The result was obtained via binding arbitration where the arbitrator found the defendant 100% responsible for the crash.

Cathy Flanzig obtained a $75,000.00 settlement for a Brooklyn musician "doored" while riding in a bike lane in Brooklyn. The settlement was obtained before trial in the Supreme Court, Kings County.

A man visiting family in Long Island was "doored" while cycling in Nassau County. After Summary Judgment was granted in the cylists favor, with the Court finding the exiting driver %100 at fault, the matter was settled for $70,000.00 prior to trial in the Supreme Court, Kings County.

Daniel Flanzig obtained a settlement of $52,500.00 for a cyclist who suffered a fractured clavicle as a result of a "dooring" from the driver of a commercial van. The settlement was obtained via a private mediation while the case was pending on the trial calendar in the Supreme Court, Queens County.

In the Spring of 2015, our client was cycling Northbound in the protected bike lane on First Avenue in Manhattan. As she passing an inactive New York City Fire Truck parked adjacent to the bike lane, a firefighter attempted to exit the rear compartment of the truck. When he opened the large compartment door, it entered the bike lane with the edge of the door striking the cylcist's right finger. The impact caused a "burst injury" lacerating her finger and disrupting tendons. The injury ultimately required surgery to repair the tendon damage. A settlement with the City of New York was reached while the case was still pending in the Supreme Court, New York County.