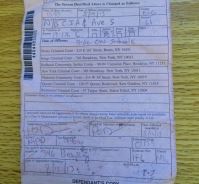 Note: New York Bike Lawyers, Flanzig and Flanzig, LLP does not focus on representing cyclists who are ticketed. We are a New York Bike Crash firm. However, if you determine that you would like to consult with a traffic lawyer, we would be happy to recommend an attorney with whom we have a close working relationship to undertake your bike summons case.

To look up your bike ticket you can use this easy link: http://a820-ecbticketfinder.nyc.gov/searchHome.action

The most common bike summons given are:

When given a ticket, most people are understandably angry and are in shock that they actually received a " bike ticket". The next feeling that pops into their head is "I am going to fight it". Depending upon the ticket and the penalty, this may make sense. You can fight alone, or you can hire a lawyer to fight it for you. The reality is, in the City of New York, your chances are slim. Unlike other jurisdictions, there is no plea bargaining with a prosecutor in a traffic violations bureau. There's just you, the officer, and the administrative law judge. Also, given the recent "ticket fixing" scandal in the N.Y.P.D., officers are being watched and come prepared for trial. There are now actual monitors in the court rooms watching the police. If the case is dismissed, the officers now have to answer to their supervisors as to what went wrong. Your hope that you will tell your sob story is never going to happen because there is no one to hear it. You will have the right to confront the officer, and offer evidence and testify, but this is only after you plead not guilty and proceed to trial. The trial will be short, and the Administrative Law Judge (ALJ) will make his or her finding.

Is it worthwhile to hire a lawyer to fight a bike summons?

The answer to this question depends upon a number of circumstances, including the type of ticket issued. Is the summons a violation of the Vehicle and Traffic Law or E.C.B.? Is it a misdemeanor or violation of the Administrative Code? Do you have an A.C.O.D. or other adjudication that requires you to remain out of the Court system? Have you filed an application for immigration to the U.S? What stage is the process in? What is the cost and penalty of the ticket vs. the cost of the lawyer? All of these are factors to consider when deciding to retain an attorney to fight the ticket, and should be considered before you decide to hire a lawyer. A lawyer will not be cheap, and also does not guarantee a dismissal. It does, however, give you the advantage of having someone who has done this before, is familiar with the process and burdens of proof, and is there to fight on your behalf.

Does a bike ticket in New York mean points on your license?

Answer: No. Under Sec 131.3 of the NYCRR, bike and pedestrian violations are not subject to the N.Y. State Point System

131.3 Point values (a) All traffic violations shall be assigned a point value of two points, except as otherwise prescribed in subdivision (b) of this section.

Am I obligated to pay a surcharge?

Under the law, the $88 surcharge for traffic violations only applies to motorists, not cyclists.

Can I get a ticket for riding on a sidewalk in New York City?

The relevant text of the statute:

a. For purposes of this section:

(1) The term “bicycle” shall mean a two or three wheeled device, upon which a person or persons may ride, propelled by human power through a belt, a chain or gears, with such wheels in a tandem or tricycle, except that it shall not include such a device having solid tires, and intended for use only on a sidewalk by a child.

(2) The term “sidewalk” shall mean that portion of the street, whether paved or unpaved, between the curb lines or the lateral lines of a roadway and the adjacent property lines, intended for the use of pedestrians. Where it is not clear which section is intended for the use of pedestrians, the sidewalk will be deemed to be that portion of the street between the building line and the curb.

(3) The term “child” shall mean a person less than fourteen years of age.

b. No person shall ride a bicycle upon any sidewalk, unless permitted by an official sign. A person who violates this subdivision may be issued a notice of violation, and shall be liable for a civil penalty of not more than one hundred dollars, which may be recovered in a proceeding before the environmental control board.

c. A person who violates subdivision b of this section in a manner that endangers any other person or property shall be guilty of a misdemeanor, punishable by a fine of not more than one hundred dollars, or imprisonment for not more than twenty days or both such fine and imprisonment. Such person shall also be liable for a civil penalty of not less than one hundred dollars nor more than three hundred dollars, except where a hearing officer has determined that where there was physical contact between the rider and another person, an additional civil penalty of not less than one hundred dollars nor more than two hundred dollars may be imposed. Such civil penalties may be recovered in a proceeding before the environmental control board. Enforcement agents shall indicate on the summons or notice of violation issued pursuant to this subdivision whether physical contact was made between the rider and another person. Any person who violates any provision of this subdivision more than once within any six month period shall be subject to the imposition of civil penalties, in an amount that is double what would otherwise have been imposed for the commission of a first violation. It shall be an affirmative defense that physical contact between a rider and another person was in no way the fault of the rider.

d. Where a summons or notice of violation is issued for a violation of subdivision c of this section, the bicycle may be seized and impounded.

Presently, New York bike lawyers does not focus on representing cyclists who are ticketed. We are a New York Bike Crash firm. However, if you determine that you would like to consult with a traffic lawyer, we would be happy to recommend an attorney with whom we have a close working relationship to undertake your bike summons case.