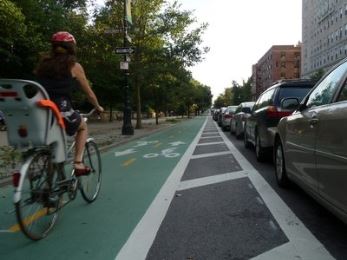 The Department of Transportation continues to create miles of bike lanes throughout New York City to help facilitate cycling in our city. In New York City, if you ride outside of a bike lane when one is available for use, you will be subject to a bike ticket for a violation of 34 RCNY 4-12(p)(1).

This code states that bicyclists must ride in usable bike lanes, unless they are preparing to turn, or are avoiding unsafe conditions (including but not limited to, fixed or moving objects, motor vehicles, bicycles, pedestrians, pushcarts, animals, and surface hazards).

Bike lanes bring along with them safety improvements for the entire street and every street user -- not just for people riding bikes. According to the DOT's Pedestrian Safety Study and the most recent Sustainable Streets Index, streets with bike lanes have about 40 percent fewer crashes ending in death or serious injury, and that's for all street users: drivers and pedestrians included. For example, after a parking-protected bike lane was installed on Manhattan's Ninth Avenue, all traffic-related injuries dropped by 50 percent. Injuries to pedestrians dropped by 29 percent and injuries to cyclists dropped by 57 percent.

Even in a clearly marked bike lane, and while observing the law, cyclists are still subject to crashes with parked and moving motor vehicles. Cyclists can be especially vulnerable to "doorings," as the bike lane can trap the rider between parked vehicles on one side, and an opening door on the other. A scenario like this leaves the cyclist no room to maneuver around the opening door. Striking an opening door can cause a serious injury to the rider and subjects the car operator and owner to liability for the crash.

It is illegal for a vehicle to block or obstruct a bike lane. Section 4-08(e) " No Stopping Zones (Stopping, standing, and parking prohibited in specified places). No person shall stop, stand, or park a vehicle in any bicycle lanes or within a designated bicycle lane...." If a vehicle or object obstructs a bike lane and a crash occurs, that person or company can be liable of the obstruction was the proximate cause of the crash and injury.

When a street is being renovated or construction effects a bike lane, the City or Contractor must adhere to the following:

Bicycle lane. The term “bicycle lane” means a portion of the roadway that has been marked off or separated for the preferential or exclusive use of bicycles.

With cars now banned from the park, it just got a lot safer. However, if you ride in Central Park, you know how dangerous it is for cyclists. Between runners, tourists, and dog walkers, a rider needs to be extremely vigilant when cycling in the park. To help combat this danger, the New York City Dept. of Transportation is proposing new rules for the parks loops. To view the proposal, click here.

(1) Bicycle riders to use bicycle lanes. Whenever a usable path or lane for bicycles has been provided, bicycle riders shall use such path or lane, only except under any of the following situations:

(i) When preparing for a turn at an intersection or into a private road or driveway.

(ii) When reasonably necessary to avoid conditions (including but not limited to, fixed or moving objects, motor vehicles, bicycles, pedestrians, pushcarts, animals, surface hazards) that make it unsafe to continue within such bicycle path or lane.

(2) Driving on or across bicycle lanes prohibited.

No person shall drive a vehicle on or across a designated bicycle lane, except when it is reasonable and necessary:

(i) to enter or leave a driveway; or

(ii) to enter or leave a legal curbside parking space; or

(iii) to cross an intersection; or

(iv) to make a turn within an intersection; or

(v) to comply with the direction of any law enforcement officer or other person authorized to enforce this rule; or

No Stopping Zones (Stopping, standing, and parking prohibited in specified places). No person shall stop, stand, or park a vehicle in any bicycle lanes or within a designated bicycle lane, unless otherwise indicated by posted signs, markings or other traffic control devices, or at the direction of a law enforcement officer, or as otherwise provided in this subdivision.

102 (a) Bicycle lane. A portion of the roadway which has been designated by striping, signing and pavement markings for the preferential or exclusive use of bicycles.

If you have been involved in a bike lane crash in New York we can help. Contact us today at (866) 352-6944. This includes how to get your medical bills paid, your bike repaired, and other compensation you may be entitled to as a result the crash and injury.