Law Passed in Honor of Bicyclists 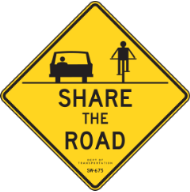 Gov. David Paterson signed into law a bill requiring motorists to maintain a "safe distance" when passing bike riders. The law is meant to reduce the number of bicycling crashes that occur throughout New York.

The bill added section 1122-A to New York's Traffic Law, which reads:

The operator of a vehicle overtaking from behind a bicycle, proceeding on the same side of a roadway, shall pass to the left of such bicycle at a safe distance until safely clear thereof.

Drivers who violate the law will be cited at minimum with a traffic offense. More serious charges could follow if the driver seriously injures or kills a bicyclist while passing at less than a reasonably safe distance.

Dubbed "Merrill's Law," the new safety measure for bicycle riders was passed in part due to an collision last November that took the life of 66-year-old bicyclist Merrill Cassel of Greenburg, New York. Cassel was riding his bike on Route 119 near White Plains, when a public bus sideswiped him. Cassel died of his injuries.

Originally, the proposed legislation included a requirement that drivers maintain a minimum of three feet when passing bicyclists. However, the three-foot requirement eventually was dropped in favor of the "safe distance" language. State legislators believed that situations could arise that required drivers to maintain more than three feet from riders, in order to ensure their safety. Of course, the "safe distance" language leaves plenty of ambiguity from case to case.

In states with bike passing laws, 16 of them require drivers to maintain a three-foot buffer zone, including Connecticut and New Hampshire. Eight states, including Oregon and Washington, have laws similar to New York's and require motorists to maintain a safe distance when passing bicyclists.