This week our firm obtained Summary Judgment for two of our clients who sustained serious injuries when struck by vehicles while cycling in Manhattan. Summary Judgment is a method of resolving issues in the case even before they are heard by a Jury. The process requires submitting motion papers to the Judge, inclusive of evidence to be considered, which typically includes depositions, photographs, and other acceptable evidence. Summary Judgment is rarely granted in negligence cases as the Court usually reserves these issues for trial. It is an aggressive, affirmative, and time consuming move by personal injury litigators to put pressure on defendants to resolve matters early or alternatively help us to seek top compensation for our clients when the matter goes to trial.

The purpose of our motions in these two cases was to have the Court make a finding as a "matter of law" that a defendant was 100% negligent in causing the crash. We also asked the Court to eliminate any issue as to comparative negligence of the cyclist. That means that the Court must also find that nothing the cyclists did caused or contributed to the crash.

In the first case, our client was cycling uptown along the west side of Manhattan using the Hudson River Trail. As he approached the 54th Street Cruise Ship Terminal the path crosses over a roadway to allow vehicles to enter the pier. A photo of the location is below: 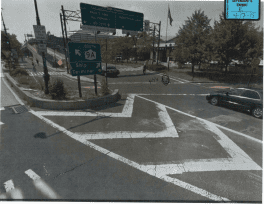 As the cyclist approached this cross-over, a cab was traveling southbound attempting to enter the pier. The cab had two stops signs where the road met the bike path. At his deposition, the defendant cab driver testified that although he stopped at these stops signs, he never looked to his left and never saw our client. He then began to move forward towards the pier ramp and struck the cyclist as he was lawfully riding in the bike path. The cab driver testified the first time he ever saw the cyclist was only after the crash occurred.

In defense, his attorneys tried to argue that the cause of the collision was the allegation by the cab driver that our client was outside the bike path when the crash occurred. The Court, after oral argument, found this defense lacked merit. The Court found that the sole cause of the crash was the cabs failure to yield the right of way to the cyclist who had the right of way and that the failure of the cab driver to see our client who was clearly there to be seen.

With Summary Judgment being granted, we now await a damages only trial in the Supreme Court, New York County.

The second case also involves a NYC cyclist biking on West 4th Street near 6th Avenue in the Village. As our client was traveling along 4th Street heading eastbound, a car suddenly pulled away from the curb and struck him. Our client did not see a directional on the car before it exited the curb and had no warning the crash was about to occur.

Location of the Crash

In granting Summary Judgment, the Court found that the defendant violated Vehicle and Traffic Law, including VTL 1128(a) which requires that a "vehicle ... shall not be moved from such lane until the driver has first ascertained that such movement can be made with safety". The Court found that the violation of this statute was the sole proximate cause of the crash.

Upon completion of additional discovery, this case will be placed on the trial calendar in New York County as well for a trial on damages only.

These two cases illustrate the need of any lawyer handling a bike crash case to understand the applicable laws in New York State and New York City designed to protect vulnerable cyclists riding NYC Streets. It also demonstrates the extra efforts by our firm to aggressively represent our clients and bring about a just result for those seriously injured by negligent drivers.