In what we believe to be a first in the New York Courts, Justice Baynes of the Supreme Court, Kings County, (Brooklyn) granted our motion for Summary Judgment for a cyclist doored by a NYC taxi Cab.

Summary Judgment is a method of resolving issues of law and fact even before they are heard by a Jury. It is rarely granted in negligence cases, and we are unaware of any other reported case where the relief has been granted to a "doored" cyclist. It requires the Court to make a finding as a "matter of law" that a party was negligent and that the negligence was the sole cause of the crash. It also eliminates any issue as to comparative negligence. That means that the Court must also find that nothing the cyclist did caused or contributed to the crash. The issue of comparative negligence typically creates issues of fact requiring a trial by a jury and a denial of summary judgment. However, here we overcame all those hurdles and convinced the Judge that nothing our client did was a cause of the crash.

In this case, our client was lawfully cycling in a designated bicycle lane on Christopher Street in Manhattans West Village. As he was mid-block, he approached the rear of an illegally parked cab in the bike lane. This forced him to leave the bike lane in an attempt to go around the cab. As he rode along side, the cab driver's door suddenly opened into his path causing a severe impact between our client's bike and the door. Another cyclist trailing behind witnessed the crash and took the photo below clearly showing the cab blocking the bike lane and the aftermath that followed. 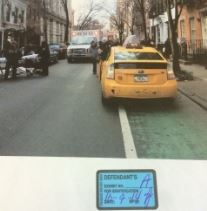 In New York, the Vehicle and Traffic Law (VTL 1214) prohibits the opening of a car door in any way that interferes with the path of moving traffic. In addition, the NYC Administrative Code also prohibits the opening of a car door into traffic as well as into the path of an approaching cyclist. We further alleged that the cab driver violated an additional section of the NYC Administrative Code which prohibits "Stopping, Standing, Parking, or obstruction a Bike lane".

After oral argument, and a review of the photos, the Judge granted our motion from the bench. The only issue left to be tried is the extent of our client's injuries which included a fractured sternum and significant knee injuries. The damages trial is expected to be held within the next 6-8 months.

We have several other "dooring" motions pending in the Courts and believe this sets a new precedent to help us in those matters. This ruling assists us holding drivers and passengers who commit this dangerous act accountable for their actions.