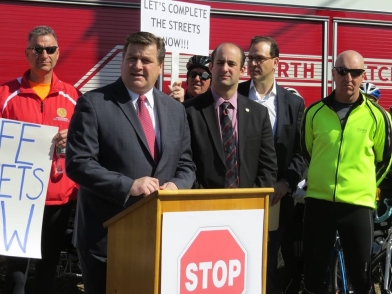 "Our roadways are dangerous, people are getting killed at almost epidemic rates," Hennessey said at a news conference in Patchogue. "It's time to complete our streets and make things safer and strengthen penalties."

Hennessey said increased spending is needed to help make roads safer for bicyclists and pedestrians and slow down drivers. Advocates called for streets to be designed with pedestrians and bicyclists in mind, not just motorists, with measures including bicycle lanes, sidewalks and medians.

"Drivers -- they don't respect that cyclists belong on the road," said Norm Samuels, 69, a cyclist and retired software engineer from Port Jefferson Station who joined two dozen or so cyclists and runners at the news conference at North Ocean Avenue and Shaber Road, where Melinda Resto, 29, was fatally hit by a car in December 2012.

Last year, Hennessey introduced legislation that would increase prison time for drivers who leave the scene of an collision in which someone was killed or seriously injured, a crime called aggravated leaving the scene of an accident without reporting. The top penalty would increase to 5 to 15 years, from 21/3 to 7 years, for someone who fled a fatal accident and had a prior DWI conviction.

He planned to amend his bill to match one introduced last year by state Sen. Lee Zeldin (R-Shirley) that would change the classification for leaving a fatal collision to a C felony from a D felony. Zeldin's chief of staff, Chris Molluso, said the sticking point between the two bills has been a constitutional issue over penalties that would apply retroactively in some cases.

"If he's considering some amendments, we'd be very open to looking at them," Molluso said.