Advocates for cyclists and pedestrians fanned out across the city Sunday, visiting collision sites and petitioning city leaders to do more to make the streets safe. 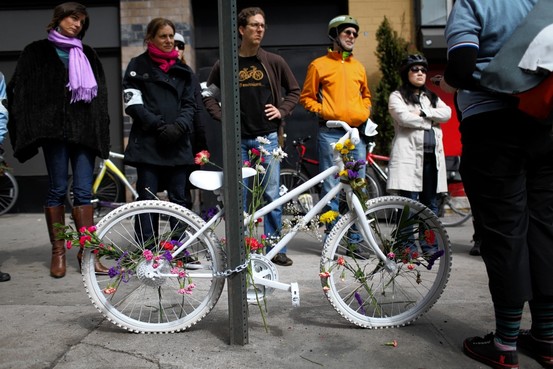 A 'ghost bike' at 96th Street and Second Avenue marks the death of Qi Yu Weng, adeliveryman who was struck by a bus on March 25, 2011.

The seventh annual memorial ride put together by the Street Memorial Project—the group whose white-painted "ghost bikes" mark the scenes of fatal cycling accidents—comes as city officials say there has been a surge of biking in New York, even as fatalities and serious injuries remain relatively flat.

In other words, they are saying efforts to make biking more accessible and safer have been working. But to many of those plying the streets on two wheels, or on foot, it doesn't always feel that way.

"I think that they're doing a better job," said Ryan Kuonen, an organizer with Neighbors Allied for Good Growth, just after she affixed a pair of white flowers to the front wheel of a ghost bike at the corner of McGuinness Boulevard and Kent Street in Greenpoint, Brooklyn. That bike marks the intersection where a cyclist named Liz Byrne was killed in 2005.

Ms. Kuonen praised the efforts of Transportation Commissioner Janette Sadik-Khan to install bike lanes and improve conditions for cycling. But she and others in the procession down McGuinness Boulevard said speeding motorists must be more aggressively targeted.

"Speeding, illegal turns, not paying attention, all that stuff," she said, cataloguing the dangers cyclists still face from cars. "The difference between death and injury is speeding."

A DOT spokesman did not respond to requests for comment about the memorial events, which included the walk through Greenpoint and group bike rides in all five boroughs.

In 2011, 24 cyclists were killed. City officials noted at the time the statistics were announced that the number was within the same range as a decade earlier, even as bike usage had quadrupled during the same period.

The DOT regularly counts the number of cyclists on weekdays at six locations in the city to extrapolate bicycle use. Bicycle commuting declined in 1999, but has risen every year since, including jumps of 32% and 26% in 2008 and 2009. The agency counted 18,846 commuting cyclists in 2011, an 8% increase over the previous year.

The DOT's Cycling Safety Indicator combines its measurements of commuter biking with reports of fatalities and serious injuries, and shows that the risk of such an incident fell by 72% between 2000 and 2010.

"I think that the dramatic increase in the last 10 years has changed the culture of traffic and certainly I think that there's an impact on drivers and how they view their role on the road," said Council Member Steven Levin at the memorial walk.

Kevin McCarthy, 58 years old, lives in the neighborhood, and said the city has improved conditions for cyclists. The software engineer in general defends the administration's installation. (His main objection to one nearby, on Greenpoint Avenue, was its location in the middle of the street. Cars simply drive through it, he said.)

"I've been riding in the city…for a little over 25 years," he said. "The bike riding has gotten better, but it still has a long way to go."