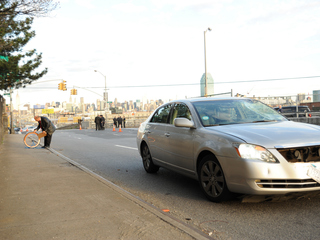 A bicyclist was struck and killed by a livery cab at Greenpoint and Borden avenues in Long Island City on Weds., April 4, 2012. (DNAinfo/Theodore Parisienne)

QUEENS — A bicyclist was struck and killed by a livery cab in Long Island City Wednesday morning, authorities said.

The cyclist, a man in his 30s, was hit by the 2007 Toyota Camry traveling eastbound on Borden Avenue at Greenpoint Avenue shortly after 5 a.m., police said.

The bicyclist, who was riding southbound on Greenpoint Avenue at the time, was taken to Elmhurst Hospital and pronounced dead, police said.

There is no criminality and the cab's 25-year-old driver is not expected to face charges, police added.