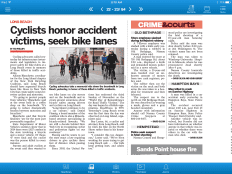 Cycling advocates called Sunday for infrastructure investments and legislation to improve safety for bike riders at a Long Beach event in memory of those killed in traffic accidents.

Allison Blanchette, coordinator for the Long Island chapter of the New York Bicycling Coalition, said Long Beach should have separated bicycle lanes like those in New York City that create safety zones between cyclists and motorists.

It’s going to protect people from vehicles,” Blanchette said at the event held in a coffee shop on the boardwalk. “It’s going to reduce dramatically tension between motorists and bicyclists.”

Blanchette said that bicycle fatalities “are for the most part preventable tragedies.”

State Department of Motor Vehicle statistics show that in 2014 there were 5,827 crashes in the state involving a bicycle and a motor vehicle. Of those, 47 were fatal and the cyclist was the person killed in every instance.

Parents and adult cyclists at the event said they wanted to see bike lanes on city streets and on the boardwalk and to create greater awareness about bicycle safety among drivers and cyclists on Long Island.

“Long Island continues to be a car culture,” said Daniel Flanzig, a board member of the coalition who is also a Mineola-based attorney specializing in bicycle-related lawsuits. “We are still a decade behind New York City in recognizing cyclist and pedestrian rights on our roadways.”

Flanzig said he wants to see the state enact a law requiring drivers to give cyclists three feet of distance when passing them.

Since 2005, the United Nations has endorsed the third Sunday of November as the “World Day of Remembrance for Road Traffic Victims.” The day was begun by a British organization, RoadPeace, in 1993. Sunday’s Long Beach event was the first time the day was observed on Long Island, organizers said.

Roy Lester, 66, a cyclist and attorney from Long Beach, said he rides his bike on the North Shore rather than in his hometown.

“I consider this too dangerous,” Lester said. “We’ve been working for years trying to get Long Beach safe . . . Our kids keep getting hurt, and adults too.”