After much delay, the city is finally getting its bikes in order.

Citi Bike, the city’s ambitious bicycle sharing program that was to begin last summer, will be up and running in May, Department of Transportation officials have announced. Software glitches had stalled the program, which will put approximately 2,000 rental bikes at 45 stations around Lower Manhattan.

The self-service, solar-powered bike kiosks will be open 24 hours a day, and bikes can be returned to any of the nearly 300 stations around the city. 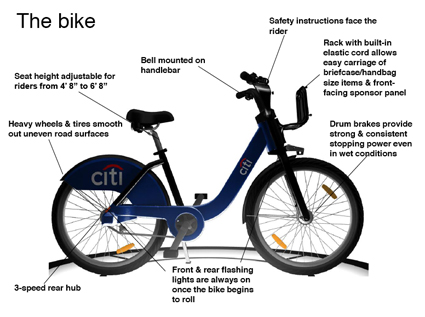 Courtesy of the NYC Dept. of Transportation

Because the city has shifted the location of some of the stations, a DOT official presented the latest map last week to Community Board 1’s Planning Committee.

Not everyone was pleased with the changes.

In Tribeca, a planned kiosk was moved half a block away, from the west side of Duane Park to the northeast corner of Duane and Greenwich (residents said it “ruined” the aesthetics and historic nature of the park), only to draw new complaints.

Committee member Adam Malitz, who lives directly across the street in Independence Plaza, said that a station at that intersection could imperil pedestrians when cars make the sharp left turn from Greenwich Street onto Duane. And Diane Lapson, president of the Independence Plaza Tenants Association as well a committee member, said the narrowness of that part of Duane Street could pose further dangers to pedestrians.

“We just can’t see how it’s going to work out on such a skinny, narrow corner,” Lapson said.

The stations are supposed to have the added benefit of deterring cars from speeding, Stephanie Levinsky, a DOT planner, told the committee.

“If there are safety concerns,” she added, “then we’ll of course look at moving the station, [but] we do want to leave a period of time to monitor it.”

Plans are still in place for a bike station at the south end of Bogardus Plaza, near Chambers Street, despite concerns about the safety of pedestrians, especially children. The kiosk is planned for what now is a staging area for the Chambers Street construction project. But once it can be installed, Friends of Bogardus Garden President Victoria Weil told the Trib, she will work with the DOT to “find ways of making [the plaza] as safe as possible for pedestrians.” One idea, she said, was to rearrange the planters into a kind of obstacle course, forcing cyclists to slow down or dismount.

With safety in mind, a station originally planned for Vesey Street near the National September 11 Memorial Preview Site will be going to Barclay Street near Church. And Friends of City Hall Park convinced the city to move a station slated for the east side of the park to a parking lane on Spruce Street.

Any bike racks that are displaced by bike share stations will be moved to nearby locations, Levinsky assured the committee. A bike rack next to Battery Park City’s Gateway Plaza has already been moved to inside the apartment complex.

Levinsky said the bike program is mostly intended for commuters, rather than for cyclists looking for a long, fun ride. “We don’t want you to take it to the greenway and ride it for two hours,” she said, “because that will end up costing you a good deal of money.”

Battery Park City resident Tammy Meltzer complained that the number of bikes in her neighborhood “seems disproportionately high for a small area.” But committee co-chair Jeff Galloway, who lives in Gateway Plaza, disagreed.

“I think the more, the merrier,” he said. “I hope we have no further delays so I can pay my 95 bucks and start using it!”