Several weeks ago I was interviewed by Mike Glover at the New York Observer regarding insurance and citi-bikes. The article was posted today and can be seen below.

I discussed with Mke the importance of obtaining proper no-fault information at the scene in order to make sure you do not become an "uninsured victim". Always call the police, obtain the drivers and owners information. If you can, try to obtain the insurance and registration information of the vehicle as well. 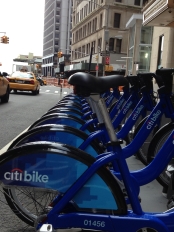 While the extensive Citi Bike user agreement has a lot of small print, detailing important things like overdue charges and optimal weather conditions, it fails to mention insurance. That’s because the Citi Bike program doesn’t offer any, not even as an option.

Without insurance, Citi Bikers are responsible for all damages incurred while using the bike. This makes Citi Bike different from, say, rental car companies that give customers the option to purchase insurance.

The Observer canvassed several Citi Bike stations throughout Midtown and spoke to cyclists about several of the issues surrounding Citi Bike, including the lack of insurance.

“I didn’t even know about that,” Scott, a Manhattan resident, toldThe Observer. ”I’m worried about it now.”

In fact, sixty percent of the people The Observer spokewith were completely unaware they were uninsured.

Without insurance, bicyclists leave themselves open to liability from accidents and for the cost of lost or stolen bikes, not to mention the costs associated with their own injuries. (Health insurance covers any injury bills to a rider, but 14.8 percent of New Yorkersdon’t have health insurance, a statistic we estimate to be higher among the bike-riding population.)

In November 2012, Erich Tamhasselnwas riding his Schwinn past the intersection of 23rd Street and Madison Avenue when he was struck by an over zealous cab driver. The collision broke Mr. Tamhasseln’s wrist and separated his shoulder.

“My bike collision put me out of three weeks of lost wages, and because the police didn’t correctly report the car’s insurance, I was out of luck,” said Mr. Tamhasseln. ”If I would’ve had bike insurance, then I would’ve have been so much better off.” But unfortunately, he “didn’t even know the option existed at the time.”

While many New Yorkers rent their apartments and renters insurance covers some bike claims, such as theft, it doesn’t extend to rented or shared products like Citi Bike, according to Craig Dawson, the president of Sports Insurance Solutions.

Mr. Dawson says that insurance is a problem that programs like Citi Bike must address, “sooner rather than later.” He said that his company wanted to partner with Citi Bike, but that there wasn’t any interest from the city.

“Bike on bike, bike on car, bike on pedestrian — issues in a crowded city will no doubt arise,” Mr Dawson said. “Regardless of how safe and secure the infrastructure being built is.”

Across the city, over 6,000 accidentsinvolving bicycles were reported in 2010, the last year that NYC DOT reported the numbers. Comptroller John Liu raised the issue of insurance last year, citing that there had been more than 100 bike-related claims filed against the city annually since 2002, with settlement and judgment costs reaching nearly $3.6 million a year.

“I support bicycling in the city, but I also think we need to be realistic about the potential exposure the city faces,” Mr. Liu told The New York Times.

New York City urged Alta Bicycle Share, the company that operates Citi Bike, to take out a $10 million insurance policy to protect itself from litigation, but that policy doesn’t protect riders. In fact, the user contract includes a limited liability statement that restricts customers to $100 claims against Alta.

Nicholas Mosquera, a spokesperson from the Department of Transportation, said that unlike drivers of motor vehicles, cyclists in the city are not required to carry liability insurance. “Independently of Citi Bike, some users may be covered by their personal insurance policies,” he said.

Daniel Flanzig, partner at personal injury firm Flanzig and Flanzig LLP, said that he has seen many people go down this road—and it doesn’t end well.

“I’ve seen more accidents than I can count, four or five accidents that ruin lives, force people to drop out of school, etc., which could be prevented with insurance,” he told The Observer.

The first Citi Bike collision happenedon May 31, just four days after the program launched. So far, more than 30,000 annual members have signed up and as a whole and riders have logged 270,000 miles. That’s a lot of liability.