Daniel Flanzig has been appointed to the Board of Directors of the New York Bicycling Coalition, New York States only Statewide Bicycle Advocacy Group.

Vision: In New York State, bicycling and walking are safe, respected, and fully integrated into the transportation system. Bicyclists, pedestrians and drivers share the road; the streets are complete; and New York State is a leader in multi-modal transportation.

Purpose: The purpose of the NYBC is to serve the State of New York and its residents by promoting the safe use of the bicycle and walking as modes of transportation, sport, recreation, health, environmental protection, energy conservation, tourism and economic development.

Mission: The NYBC advocates for the rights of all bicyclists and pedestrians throughout New York State by supporting safety, education, and access for road and trail users. To fulfill this mission, NYBC pursue the following long-term goals.

Goals:
1. Provide a coherent, credible voice for the interests of all bicyclists
2. Serve as a resource for bicycling clubs, bicycling educators, bicycling industries and retailers, and other bicycling and pedestrian related organizations
3. Assist in the growth and development of local advocacy groups already in existence and facilitate the formation of new local advocacy groups where they don't yet exist
4. Increase the political power and strength of the organization by enlisting as large a membership as possible
5. Foster among the general public a favorable opinion of bicycling
6. Ensure routine accommodation for bicycle, pedestrian and other non-motorized users throughout the transportation and transit system
7. Promote bicycling and pedestrian safety for all age groups through education and through the enforcement of traffic rules for motorists, pedestrians and bicyclists
8. Inform our membership and the general public of government activities affecting bicycling, safety, health, transit, tourism and infrastructure programs
9. Inform and educate our membership and the general public regarding legislation that affects conditions for cyclists and pedestrians
10. Facilitate the exchange of information on bicycling

To learn more about the NYBC visit www.NYBC.Net 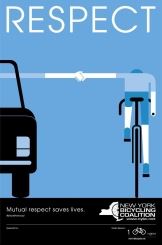