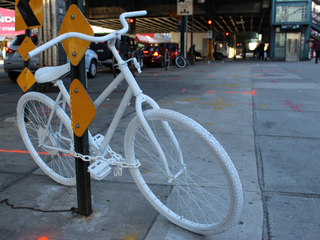 FORDHAM — Amid the clamor of cars hurtling along Jerome Avenue and trains rumbling overhead, a solitary white bicycle leans against a signpost.

A small plaque attached to the post seems to whisper its message: “Cyclist Killed Here. Rest in Peace.”

Joseph Nelson, a 54-year-old handyman and former bike messenger, was the cyclist killed in a crash near the intersection of that avenue and Fordham Road last April.

Sunday marked the one-year anniversary of his death. Police have yet to announce any suspects in the fatal crash, which an autopsy report ruled was caused by an open car door.

On Sunday, April 21, the group will lead its eighth Annual Memorial Ride and Walk, when cyclists and their supporters visit every snow-white bike memorial installed during the previous year.

Joseph’s brother, John Nelson, plans to travel more than 400 miles by bus from Virginia to attend the event, partly to ensure that as his brother’s case file languishes, his memory does not wither with it.

“My brother wasn’t trash. He wasn’t a throwaway or disposable,” said John, 58. “That’s one reason I’m going to make the trip to the memorial — to show people that he was a human being.”

After Joseph Nelson’s crash just blocks from his apartment, local precinct officers responded to the scene.

But the special citywide police unit that investigates serious crashes was not notified until more than a month after the incident, according to an NYPD investigator, in an apparent breach of police protocol.

Since then, police have not found any witnesses or video of the crash, nor identified the person who apparently opened the door Nelson struck, who then left the scene, according to Nelson’s family and their lawyer, Daniel Flanzig.

A police investigator told John Nelson during their final conversation in October that, without any leads to go on, the unit planned to close the case, according to Nelson. 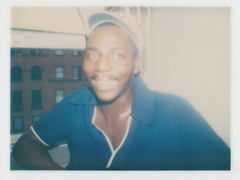 “I think it was all a comedy of errors,” Nelson said. “I wasn’t satisfied at all.”

The police did not immediately respond to a request for comment Wednesday.

The NYPD recently modified the way it responds to traffic crashes like the one that killed Joseph Nelson, according to a letter sent by Police Commissioner Raymond Kelly to the City Council in March.

Now, patrol officers will summon the special investigation unit whenever someone is critically injured in a crash. In the past, the unit was only notified if someone had or appeared likely to die.

Also, the number of such investigators will increase. And, in a move long sought by cycling advocates, the unit’s name was changed from the collision to the Collision Investigation Squad.

Last year, 18 cyclists and 148 pedestrians were killed in traffic crashes, according to the city Transportation Department.

The memorial ride Sunday will stop by 17 of the bike crash sites, as well as two sites of crashes this year and one Ghost Bike installed for any unreported deaths. (The memorial group relies mainly on media reports to install the bikes, which can cause discrepancies between its death count and the city’s.)