Claims involving defective and dangerous bike lanes are very difficult to prosecute in New York. If there is a defect in the bike lane, such as a pothole or other defect, you must establish that the municipality had prior written notice of the condition. When it comes to claims involving design defects in roadways and bike paths, municipalities get immunity from lawsuits from their decision-making process regarding design and implementation of these facilities.

Recently we were able to defeat a motion by the City of Long Beach in such case involving defects on the Long Beach Boardwalk bike lane. The City sought to have our client’s case dismissed on the grounds that the City did not have notice of the condition that caused the crash and that the City was entitled to immunity from suit on its decision-making process. Following the denial of the City’s motion, we were able to enter into a settlement with the city ending the case and also bring about a change in the way the bike lane is now delineated.

The Long Beach boardwalk has a long history of being problematic. The boardwalk was rebuilt after being destroyed by Hurricane Sandy. Part of the re-building including the replacement of the bike lane on the boardwalk. The bike lane did not have any markings to delineate it. Rather, the wood was placed horizontal on the walk and the rest of the boardwalk was vertical. It was learned during depositions that the wood chosen by the city would let paint adhere, the desired method of marking the lane. Instead of painting, the city placed awkward and dangerous bike lane signs along the edge of the path as a way to delineate its existence. The signs were medal and had heavy non-flexible bases.

On the date of the crash, our client, an experienced cyclist, was riding in the bike lane on the boardwalk. As she approached an area for beach access a group of kids came off the beach and entered the bike lane. While attempting to avoid them she swerved and struck the bike lane sign causing her to crash and injure her shoulder. Our claims were that the bike lane was not properly delineated giving pedestrians knowledge of its existence and that the manner in which to City to choose to identify the bike lane was dangerous and violated current safety standards (MUTCD) on how to properly marked a bike lane. 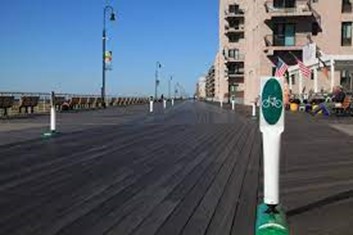 In denying the motion to dismiss and finding in our favor, the Court found that there was sufficient evidence to support the fact that the City was well aware that the manner in which the bike lane was marked was unsafe. The Court further found that the immunity did not apply in this scenario nor was there proof that there was a sufficient decision-making process carried out by the City to warrant their entitlement to immunity.

Following the decision and settlement, the city modified the bike lane signs. The signs are now consistently placed along the bike lane, smaller in size, and mounted with flexible posts making them less dangerous to cyclists who may make contact with them.

While the monetary recovery was one part of Justice obtained for our client, the greater reward for her and our office is that this lawsuit made the boardwalk safer for the thousands of cyclists who will use it this summer and for year to come.