Pedestrian vs. Cyclist Crashes Are Rare -

Even Fewer Find Their Way to Court 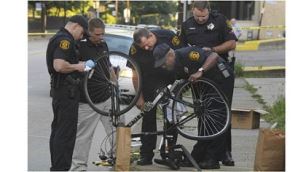 Jill Tarlov's death from a collision with a cyclist in Central Park last week was a New York City rarity, as are lawsuits after bikers ram pedestrians.

From 1996 to 2005, 11 pedestrians across New York City died after being struck by bicyclists, according to a report by four city agencies. Most of the victims were older than 60, and three had disregarded traffic signals. From 2006 to 2013, there were just four pedestrian deaths, according to the city's Department of Transportation.

Very few bike accidents involving pedestrians wind up in court, according to lawyers specializing in such cases. Victim injuries are rarely serious enough to attract the attention of plaintiffs' lawyers, and pedestrians who stray into bikers' lanes sometimes share the blame.

"The numbers are historically really, really low," Daniel Flanzig, a Manhattan attorney who specializes in defending cyclists, said of both serious pedestrian injuries and lawsuits over them. "There's not an epidemic."