On the Eve of Citibike, Remembering the City's Ghost Bikers 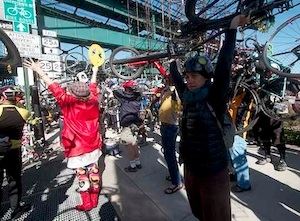 On May 8, the city will launch its first bike share program. But Sunday's ghost bike memorial gathering was a snapshot of a city still struggling to embrace its riders and keep them safe. With her back to the frustrated congestion, Street Memorial Project spokeswoman Leah Todd read the names of cyclists killed in 2012 and 2013: Emma Blumstein, Shaquille "Swizzy" Cochrane, Terence Connor, Tchaka Cooke, David "Troy" Ellis, Henry Garcia, Mireya Gomez, Roger Hernandez, Victor Lopez, Jean Malizia, Alexander Martinez, Daniel "Danny" Martinez, Joseph Nelson, David Oliveras, Ramon Russel, Ronald "R.J." Tillman, and four unnamed cyclists.It's a bright, cool Sunday afternoon, and jammed car lines are radiating from Queens Plaza. The N, Q, and 7 trains rattle above intersections. But on the corner of Jackson Avenue and Queens Boulevard, several dozen cyclists have stopped to place flowers in the spokes of a bicycle that's been spray-painted white. The cyclists ignore the terse horn honks; the sign they install on top of the bike is a dedication to cyclists whose deaths didn't make the news.

The Street Memorial Project has been blessing and installing ghost bikes in remembrance of cyclists killed in traffic for eight years. And this year, Todd said, the number of cyclist deaths hasn't significantly changed. Though down from last year's 22 fatalities, the New York City Department of Transportation still reported 18 cyclists killed in 2012. Meanwhile, overall traffic fatalities increased by nearly 12 percent, and hit-and-runs were up by 31 percent.

But Sunday's memorial, weaving throughout all five boroughs and converging at Queens plaza, was less about demonstrating stats and more about installing small comforts for the living--those who too often feel justice for cyclists has not been served. A couple of blocks south of the Metropolitan Museum of Art on Fifth Avenue, Daniel "Danny" Martinez's family waited for the riders with balloons and flowers. Almost exactly a year ago, the 27-year-old bike messenger and father was felled under a truck.

"Today is just like it happened yesterday. We're still stuck," a family member of Martinez's, who didn't want to be identified by name because of ongoing litigation, told theVoice. "This day is a closure for me, for his child, for his siblings," the family member said.

The NYPD told reporters that Martinez had been holding onto the back of the truck that killed him--something that Martinez family has difficulty believing. The police reported that they did not suspect criminality in Martinez's death, an oft-delivered line that has received much scrutiny from families of dead cyclists, activists, the media, and then City Council last year.

Last month, Police Commissioner Ray Kelly announced that the NYPD would be beefing up its "Collision Investigation Squad"--after changing its name from collision Investigation Squad--and investigating crashes that didn't just involve cyclists "dead or likely to die." Those changes, however, don't go far enough, says Josh Bisker, an environmental activist at the memorial ride who helped launch a "living street will" campaign last month. On streetwillsnyc.com, cyclists submit video wills asking the city to fully investigate their deaths, should they happen in traffic.

"The Street Wills Project is supposed to be a wake up call, of sorts," he said.

Still, Bisker is hopeful that the bike share could also spark more openness and empathy for cyclist victims in the future.

"People are going to think, 'Oh, one of my tribe, a New Yorker, has died, has suffered some harm,'" Bisker said. "As opposed to 'some guy on a bike.'" 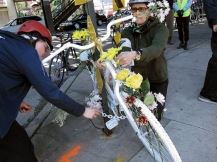 Daniel Flanzig, a lawyer who has represented injured cyclists and their families for 16 years and rode in the memorial on Sunday, expressed a similar sentiment.

"When you study the other cycling cities, like Amsterdam, it was a mess before it got better," Flanzig, who has developed both an iPhone app and a website to better collision reporting, said. "But eventually, over time, it became a cycling culture and the cars learned how to deal with bikes.

"I think that's what's going to happen in New York," he added. "It won't be pretty for a while, but at least it's going to be a start."