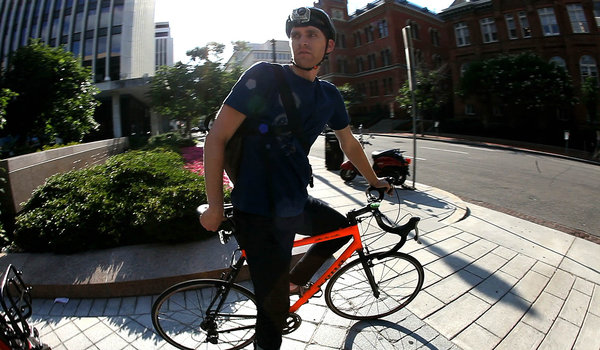 Evan Wilder, who commutes to his job in Washington, was hit by a driver who cursed at him.

WASHINGTON — When Evan Wilder went flying onto the pavement during his bicycle commute one morning here, he didn’t have time to notice the license plate of the pickup truck that had sideswiped him after its driver hurled a curse at him. Nor did a witness driving another car.

But the video camera Mr. Wilder had strapped to his head caught the whole episode. After watching a recording of the incident later, Mr. Wilder gave the license plate number to the police and a suspect was eventually charged with leaving the scene of an collision.

“Without the video, we wouldn’t know who did it,” said Mr. Wilder, 33, who was bruised and scraped in the crash.

Cyclists have long had a rocky coexistence with motorists and pedestrians, who often criticize bike riders for a confrontational attitude, and for blowing through stop signs or otherwise exempting themselves from the rules of the road. Now small cameras — the cycling equivalent of the black box on an airplane — are becoming an intermediary in the relationship, providing high-tech evidence in what is sometimes an ugly contest between people who ride the roads on two wheels and those who use four.

Video from these cameras has begun to play an invaluable role in police investigations of a small number of hit-and-runs and other incidents around the country, local authorities say. Lawyers who specialize in representing bicyclists say they expect the use of cameras for this purpose to increase as awareness of the devices goes up and their prices, now starting at around $200, come down.

Some riders even argue that the technology will encourage cyclists to keep themselves in check during dust-ups with drivers.

“I know my actions before and after some event are going to be recorded if I’m the one being a jerk,” Mr. Wilder said. “It makes me want to be careful.”

Bicyclists say cameras can also deter motorist harassment, a problem that many complain about and that cities like Los Angeles and Berkeley, Calif., have sought to combat with new laws.

“It’s a fact of life that on American roads that you get punked, cut off purposely, harassed, not once but on a regular basis,” said Bob Mionske, a former Olympic cyclist who is now a lawyer representing bicyclists in Portland, Ore. “If motorists start to hear about bikes having cameras, they’re going to think twice about running you off the road.”

Gary Souza, a cyclist in Sacramento, said something like that happened to him. He wears a camera on his helmet during his 50-minute commute each way between his home and office. He began riding with the device this year after buying a $7,000 velomobile, a three-wheeled recumbent cycle with a shell around it.

“Even though it’s insured, if anything happens I figured I wanted to get it on camera,” said Mr. Souza, who works in information technology for the state of California.

A couple of months ago, Mr. Souza said, a motorist became upset after the cyclist crossed in front of his vehicle to make a turn. The driver got out of his car to confront Mr. Souza, who pointed to the camera on his head.

The new cameras, which have started to catch on in the last few years, are meant for shooting video and photos while skiing, surfing and doing other sports. Likewise, many cyclists use them to memorialize their rides.

One of the most prominent bicycle crash videos so far was recorded in April by two Brazilian riders who were climbing the hills of Berkeley when a black car knocked them down and sped off. Neither bicyclist was seriously injured, according to the Berkeley police. The video of the crash has been viewed more than 362,000 times on YouTube.

The Berkeley police identified the car’s license plate and later found the man the vehicle was registered to. They believe he falsely reported his car stolen to cover up for the driver of the car and are still investigating the incident, said Capt. Andrew Greenwood, a spokesman for the police.

On a recent Friday evening, as the streets of downtown Washington were jammed with cars heading home, Mr. Wilder pedaled away wearing a camera on his forehead, looking like a spelunker wearing a headlamp. He scooted between parked cars and traffic on the road, sometimes with less than a foot of space between him and moving vehicles.

The video Mr. Wilder shot of his crash in Washington, which occurred last August, at first did not seem as if it would help much in tracking down the motorist who had struck him. But Mr. Wilder, who works in the photography department of National Geographic, examined the video frame by frame until he discovered a clear picture of the vehicle’s license plate, captured while he was lying on the ground.

The District of Columbia’s office of the attorney general charged the motorist, John W. Diehl, with leaving the scene of an collision. Federal prosecutors, who handle felony cases in the district, are also looking into the case.

Mr. Wilder said, “Most cyclists don’t use cameras so Mr. Diehl may have assumed he could assault and drive away anonymously.”