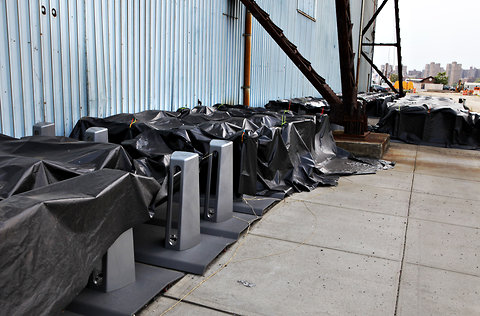 First it was the software. Now it is the surge.

The city’s Transportation Department said Friday that its long-awaited bike share program, scheduled to begin last summer before faulty software forced its delay, had been postponed again — this time because of equipment damagesustained during Hurricane Sandy.

After flooding at the program’s storage facility in the Brooklyn Navy Yard, bike share will now begin in May, the department said, and on a smaller scale than originally planned.

Officials said that before the storm, about two-thirds of the system’s equipment was stored at the Navy Yard. Though some pieces, like bike frames, were not significantly damaged, the department said, many individual parts of the system with electrical components will have to be refurbished or replaced.

Janette Sadik-Khan, the city’s transportation commissioner, said she was pleased that a spring opening was still expected, given the scope of the storm’s damage.

“There were several feet of water in the bike share warehouse that night,” she said in a telephone interview on Friday.

The system’s pieces are weather-proof, “but they’re not intended to be totally submerged in salt water baths,” she said, adding, “We’ve literally had to open every piece of equipment with a transistor or a circuit board to see what the damage is.”

The city said the new timeline for the program, known as Citi Bike and operated by Alta Bicycle Share, would not affect the $41 million in private financing from Citi to underwrite the system. Alta declined to comment.

The department said the 5,500 bikes would be clustered in the “densest and most geographically contiguous parts of the service area” in Midtown, Lower Manhattan and Brooklyn. Officials hoped to expand to 7,000 bikes by the end of 2013, filling gaps in planned service areas across Brooklyn and into Long Island City, Queens.

Ms. Sadik-Khan said “we still remain committed” to expanding the program to 10,000 bikes, but she said she was unsure when that might happen.

Last summer, the program was delayed amid software concerns after a dispute between Public Bike System Company, Alta’s partner based on Montreal, and 8D Technologies, which had supplied the software for successful programs in cities like Boston and Washington.